When local controversy erupts, we don’t have to take our cues from the partisan, uncivil tone dominating national policy debates. After all, Colorado Springs has learned a thing or two from Amendment 2, the Moo campaign, and the Ted Haggard scandal to name a few. We’ve learned that calling other people intolerant does not “Create Community”.

emotions among residents, whether Christian, Jewish or Atheist.   Some people see them as just another example of the city thumbing its nose at anyone who does not subscribe to the majority religion. Others view any objection to the banners as liberal intolerance of a positive Christian message. Are either of these really true? Rather than hunker down into our comfortable, adversarial positions, Citizens Project says let’s focus on finding our common ground. After all, our nation really is the global beacon of religious freedom, so let’s reach for our highest selves.

Surely, you may ask, doesn’t our community have more important issues to tackle right now, such as homelessness and drastic budget cuts? It’s a reasonable question, but don’t forget we are talking about the First Amendment; how our diverse residents share the public space together. And more practically, our city’s land use division is required to adopt a code to define who gets banners in the public right of way, since none currently exists. 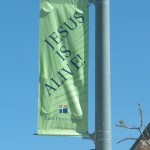 As a dedicated local watchdog for religious freedom and separation of church and state, Citizens Project wants to lead the way in working with community members to find our common ground. We are reaching out to leaders representing diverse perspectives. Let’s listen respectfully to each others’ point of view, and try to put aside our preconceptions of each others’ motives. We may still disagree in the end, but we’ll understand one another more, and hopefully create real community. Who knows, we might even become a national model for how to have civil debate on core community values. Let’s bring together our Christian, Jewish, Atheist, and other faith communities to build bridges, and bury our national reputation as the “Gettysburg of the culture wars”.

Religious exemptions: An experiment on our liberties — Part 2

Listen Up: Kristy Milligan and Richard Skorman on KVOR with Mark Goldberg