Citizens Project celebrated the recent overturning of Proposition 8, California’s anti-gay marriage law, and it made us wonder; how do California’s LGBT laws stack up to Colorado’s?

Colorado had two items on the 2006 ballot regarding same-sex marriage.  Referendum I was a proposed law that would have “legalize[d] domestic partnerships, providing same-sex couples the opportunity to obtain the legal protections and responsibilities granted to married couples under Colorado law.” (CNN)

The other item on the ballot was Amendment 43, which would have defined marriage as being between a man and a woman.  Amendment

43 passed with 56% of the vote, and Referendum I, along with LGBT marriage equality, was defeated when 53% voted against it. (CNN)

However, some rights were granted to same-sex couples in 2009.  HB 1260, which Governor Bill Ritter signed in April of 2009, legally allows “couples (gay, lesbian, or heterosexual) to enter into ‘designated beneficiary agreements’. Designated beneficiaries would have certain rights, including the right to receive state employee pension benefits, health insurance coverage, the right to medical decision-making for an incapacitated partner and the right to inherit if a partner dies without a will.” (HRC)  This bill did more than help same-sex couples; it helped unmarried heterosexual couples as well as people who can’t afford a lawyer to draft a will. (DallasVoice)

California’s laws regarding marriage are more complex.  For a few weeks in 2004, the Mayor of San Francisco issued marriage licenses to same-sex couples, but these were later nullified by California Supreme Court.  Then, in 2008, Proposition 8 was introduced and voted on, and passed in the November election with 52% of the vote.  This proposition said that, “Only marriage between a man and a woman is valid or recognized in California.”  (CA Voterguide)  However, on August 4, 2010, a California Judge reversed Proposition 8, calling it unc

onstitutional.  This decision will be appealed, and at least for now, same-sex couples in California are not allowed to marry.  That could change, depending on the ultimate outcome of this litigation.

Colorado’s 1992 Amendment 2 is an ugly blotch in our state history. Amendment 2 would have prohibited legal protection from discrimination for gays and lesbians.  It passed with xx% of the vote. Fortunately, justice prevailed and Amendment 2 was overturned by the Colorado Courts. Given this attempt to legalize discrimination against LGBT people, it may surprise you that California and Colorado have very similar laws in other areas that affect LGBT communities.

Employment: Both Colorado and California have laws that protect people from being discriminated against due to their sexual orientation and gender identity.  California put these laws into effect in 1992 and 2003, where Colorado put them into effect in 2007.  (HRC)

Housing:  Both Colorado and California have laws that prohibit housing discrimination based on sexual orientation and gender identity.  For Colorado, this occurred with the passing of SB 200 in 2008, which, in addition to pre-existing nondiscrimination laws for sexual orientation and gender identity to employment, added housing, public accommodations, credit transactions, jury service, and more to the legally protected areas. (HRC, HRC)

Hate Crimes:  Both Colorado (in 2005) and California (in 1999) include sexual orientation and gender identity in their state hate crimes law (HRC)

School discrimination:  Both Colorado (in 2008) and California (in 2002) have laws that address discrimination, harassment and/or bullying of students based on sexual orientation and gender identity. (HRC) 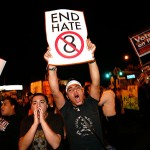 Adoption:  Both Colorado and California allow second-parent adoptions (adopting the child of one’s partner) as well as same-sex couples jointly petitioning to adopt (adopting from the child’s biological parent(s) or is in the custody of the state) (HRC)

Out-of-Jurisdiction Recognition:  In order to be eligible for benefits and protections extended by Colorado, couples must re-register with Colorado regardless of their relationship status elsewhere.  California, on the other hand, recognizes out-of-jurisdiction marriages that occurred before November 2008 as valid marriages, and all other same-sex marriages and civil unions or domestic partnerships as valid domestic partnerships. (HRC)

We can see that Colorado and California’s past in regard to LGBT issues are very similar.  Both states had, or are in the process of having, bad legislation overturned that would have prohibited equal rights from being attained by LGBT communities.  Both states are among the top LGBT-friendly states with regards to discrimination laws.  And they both, despite all of these positive attributes, have a long way to go before true equality is reached.

Voices From The Past: Amy Divine

There’s an app for that? HRC’s “Buying for Equality” iPhone app

Citizens Project office move: What it means for you