Have you seen our new billboards around town? 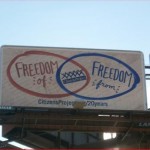 The campaign, which celebrates our 20th anniversary, highlights work done since our organization’s inception. In the last two decades, Citizens Project has provided a moderate and reasonable voice in favor of pluralism and church/state separation across the community and state.

“We have a long history of challenging Colorado Springs residents to think differently about the potential of our community and the power of shared values,” Executive Director Kristy Milligan said. “We hope this campaign will inspire people to continue working together to make the Pikes Peak region the best place it can be — for everyone.” 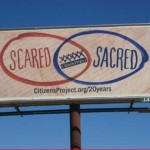 The campaign will appear in the greater Colorado Springs area, thanks to the generosity of Lunchbucket Creative, Lamar Outdoor Advertising, and Citizens Project’s Communication Committee members.

You can learn more about the Citizens Project’s 20th anniversary and get involved on our special anniversary page.

Voices From The Past: Amy Divine