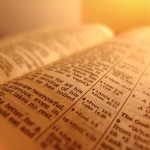 “In God We Trust.” Where Politics Meets Piety.