This letter was written by TK Hofmann. He read it at Citizens Project’s Creating Community Breakfast on June 7, 2012 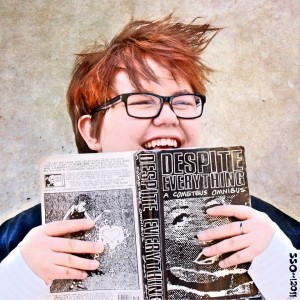 You have changed a lot since I was born here in 1993. Some of the changes have been for the better, others not so much. But, change nonetheless. Through this change, you have been growing tremendously. But this change and growth does not feel immediately apparent to me as a transgender high school student. Often, I feel that I’ve grown and worked to better you, you have not done the same for me, you have just expanded your reaches out into undeveloped prairie and stretched your arms to the outskirts of Denver. Despite this abandonment that I feel you have often left me with, I have one future dream for you: That as you build out, you also build up. You build yourself up for equality, and diversity. You build up your compassion and tolerance, so you can be the great city that you were meant to be. But more than this, I want you to let the people that are trying so hard to construct this future Colorado Springs, do so. Citizens Project has been one of these builders. For the past twenty years, Citizens Project has been building like no other. Through their work on creating religious freedom, activating civil engagement, and advocating for equality and diversity, Citizens Project has not only built a strong foundation for us to stand on, but they have provided us with tools to continue building for the next twenty years. With this foundation, and these tools, we can activate and educate and we can build a new city. But, only if you let your allies do their work. Let your great minds, and passionate hearts build a city that we can be proud of, a city that we can truly call home. Let groups like Citizens Project create a city for future generations to feel safe in. Make yourself a city where people come to for compassion and acceptance, not a city where people like me want to leave as soon as they can. I’m not asking you to be a liberal super-city, I’m asking you to be a city of diversity and safety, for everyone. Be the city we are trying to build.

Be a city that, in twenty years, I will be proud to call my home town.