Remarks made by Warren Epstein at the Citizens Project Creating Community Breakfast on June 7, 2012 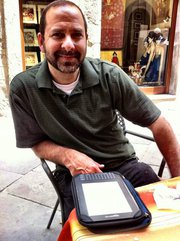 My wife, Jane Turnis, and I were there at the birth of Citizens Project. It was the early ‘90s, and Focus on the Family had just moved to downtown Colorado Springs. In a few months, other parachurch organizations  followed, and it felt that there had been some kind of hostile takeover of our town. It felt like we were living in some weird reality show: “Fundamentalists Gone Wild.” We talked about some of the horror stories over drinks with Amy Divine and Doug Triggs, and we did what we usually do about this kind of thing: We whined about it.

Then, Amy and Doug did something about it, forming Citizens Project to counter the voices of extremism that were growing ever louder in the Pikes Peak region.

As a reporter for The Gazette, I got a front-row seat to this growing chorus of ultra conservative Christians.  Don’t get me wrong. There many of these organizations were and are doing great work. But what they did was empower people on the fringe who saw this as an opportunity to gleefully tear down the walls between church and state.

We saw it with our son’s public school teacher who ranted to the children about evils abortion, refused to teach evolution and gave extra credit assignments about Jesus. Sadly, he needed the extra credit.

Even worse was a local cop who gave out Bible tracts during service calls. One ended with a mentally handicapped young man, who’d been the subject of a noise complaint, frantically calling his sister to tell her “This policeman came to my apartment and told me I’m going to hell because my music was too loud.”

Now, I’m sure the cop didn’t say that. He probably said something about going to hell. But this is the problem when the boundaries between church and state crumble. I had an editor at The Gazette who didn’t understand what was so wrong about what the cop did. But when I shared this story with folks at Citizens Project and they were rightly horrified. A government representative carrying a gun and spreading the gospel? Not a good idea.